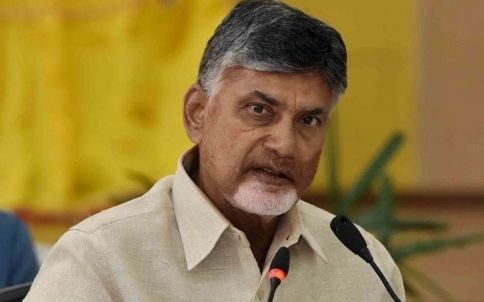 Amravati: When the doors are closed for a leader who wants to come to power at a stage where age and negative sentiment against the party are dominating, he just tried his last trump card that is ‘Hindutva’. He is none other than former Chief Minister of AP, TDP Chief Chandrababu Naidu. With this, he is trying to dominate Saffron party and gain faith of Hindus. He was dethroned in 2019 elections after he said good bye to BJP.

In order to remain relevance he used each and every opportunity like increase in price of Tirupati Laddu, on declaration of faith in Tirumala when CM refused to do so during the latter’s visit to the holy place and to Ramatheertham on idol desecration. But it seems nothing worked for him and his party as of now. As a last resort, he came up with emotional speech branding CM Jagan as a Christian Chief Minister but in vain.

TDP Chief, after defeat in 2019, could not find any pertinent issue to corner Jagan, who is leading in public esteem with a lot of welfare schemes meant for all section of people from day one after taking oath as CM. Now Naidu is trying to use Hinduthva card and trying to get closer to BJP and PM Modi, which looks to be too long for him to reach the target.

BJP says NO to CBN
AP State BJP leaders were surprised to see Naidu hijacking their slogan and slashing APCM to come into race sidelining them. At the same time there was news that CBN is trying to get closer to BJP but the ruling party is not at all enthused by Naidu’s proposal. After observing their leaders and cadre moving towards BJP, Chandrababu in a desperate move took the issue of attacks on temples in different parts of AP. The way he went to Ramatheertham and his speech on the day shows how Naidu is eager to grab Hindu vote bank for the TDP and defame Jagan with baseless allegations.
BJP top leaders are not at all convinced by Naidu’s action and we can recall the statement made by Union Home Minister Amit Shah that doors are permanently closed for Naidu who is termed as an opportunist by Amit Shah. Even AP BJP leaders come to a conclusion that allying with TDP is a closed chapter. But Naidu is playing a dangerous game by taking up Hinduthva agenda, just to cut short the BJP’s growth in AP as per political sources. With Tirupati by poll in sight, Naidu started game plan to consolidate Hindu vote bank, but AP CM going smooth keeping eye on all religious sectors, it is difficult for both Naidu and the TDP in near future to overcome.