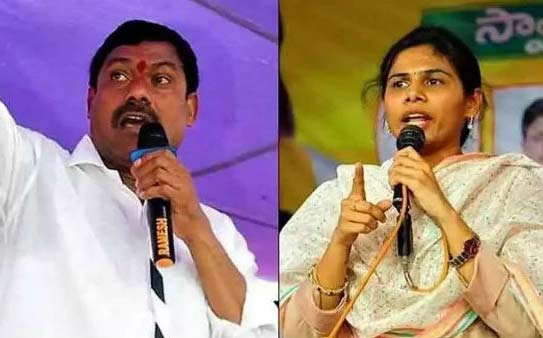 Hyderabad: In early hours on Wednesday, Bowenpally police arrested former TDP Minister Bhuma Akhilapriya in connection with kidnap of Chief Minister K. Chandrasekhar Rao (KCR)’s relatives. She was moved to Gandhi hospital for health check up before presenting her in front of Magistrate. High drama went on at Gandhi Hospital when Akhilapriya fainted while tests were being conducted. After thorough tests, doctors clarified, the fainting  was due to weakness and all is well with her.

Later, police showed over enthusiasm to move her from hospital by switching off the power at Gandhi hospital. This caused severe discomfort to the patients at Gandhi hospital. Police took Akhilapriya from back door of hospital and presented her before Secunderabad Judge quarters and was sent to judicial custody for 14 days. She is in Chanchalaguda right now, but her sister Mounika came up with a different version in the case.

Speaking to HMTV exclusively, Mounika said that it is political vendetta against their family. “Is there no right for us to stay in Telangana? Why Telangana Government is acting like that, is it because we are from Allagadda? My parents stayed more at Hyderabad than at Allagadda in Rayalaseema. I and my sister were brought up in Hyderabad, this is not the correct way to treat us in a neighbouring state. My sister is a former minister, there were no one to hold her when she fainted in Gandhi hospital, where are people who talk about human rights?” she asked.

When questioned about Bhargav Ram, Akhilapriya’s husband and A3 in the case, Mounika said he has life threat in the Hyderabad due to political differences with the ruling parties in  both the Telugu states.

A.V.Subba Reddy was in the list who was arrested, but Subba reddy was surprised to see his name as A1. According to him, it was Akhilapriya who gave supari of 50 lakhs to kill him and how can he join hands with her to kidnap. He also said it was a false case on him and will come out of this.