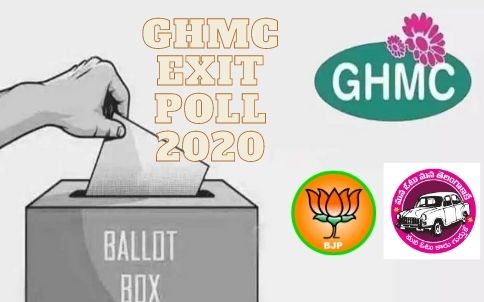 Hyderabad: Dec 1st witnessed GHMC elections with voting percentage of 46.7%, which is a little higher than previous one in 2016. There were minor clashes on the polling day with money inducements and liquor flow going on a   large scale. The fraud was practised by all parties. In a few areas, the rate was almost Rs. 15000 per vote which shocked the pollsters.

The percentage of poll was low in old city and increased in rest of the city, particularly in city outskirts on all sides. Leaders of major parties, TRS and BJP, are still in a dilemma, as is the case with the pollsters, about the last hour run by voter. The ruling TRS was hopeful until 4 pm after seeing the low percentage of voting that they were on safe side. Even before the polling ended, BJP leaders started criticizing SEC and TRS that they were the main reason for low percentage of voting. We have even witnessed debates in electronic media and opinion pieces in print media that the govt. should come up with measures to increase the percentage. But with four continuous holidays, and Covid pandemic everywhere, the percentage should satisfy everyone at the end of the day.

TRS: The ruling party appeared uncomfortable from day one after Dubbaka by poll result was announced. They were in a hurry to conduct GHMC polls much before the schedule. After series of meetings at Pragathi Bhavan with TRS leaders and AIMIM President Asadudding Owaisi, Telangana Chief Minister K. Chandrasekhar Rao (KCR) decided to go for an early poll and there was no indication to the media. SEC kept silent about the announcement of the date. Sudden floods to the city added to anti-incumbency sentiment. It was supposed that the flood havoc would be a major setback for pink party. LRS burden on middle class and the poor, challans on auto rickshaws, delay in rehabilitation schemes all pushed TRS into danger zone on poll day. Even the surge in the BJP with national leaders participating in the campaign, road shows, and the increased momentum made TRS to rethink its strategy. Even on poll day, when we conducted exit poll, voters who gave positive ink on BJP inside booth said we are strong supporters of TRS. But it is for the first time that they were voting for saffron as they did not like sitting corporators and they were keen on  teaching  a lesson to the ruling party. But the call given by Telangana CM to help his party win for the sake of peace and the law and order in Hyderabad, and KTR’s personal call to voters once again to keep Ganga-Jamuni culture intact made the difference at the end.

BJP: The saffron party was mainly dependent on three factors in these GHMC elections. Hinduthva card, anti-incumbency sentiment against the TRS, strong momentum created by the party’s President Bandi Sanjay with his arrogant remarks or rallies from morning to evening. He was the first BJP leader or President to visit Bhagya Lakshmi temple near Charminar in the old city in the past few years, with a target to prove BJP is the only party that can face dominant Muslim leaders of old city. They thought it is  a master strategy for elections in Hyderabad with considerable Muslim population. But the same strategy altered their fortunes on poll day. Incident which happened a day before the polling day in Khairatabad went against the BJP and CM’s appeal to vote for TRS to maintain law and order situation and protect Hyderabad from communal clashes got registered in the voter’s mind.

MIM: The Majlis arty played safe in old city, their own bastion, but certainly will be losing some seats when compared to last elections.

The percentage of BJP will be going up to 32% which is a minor increase when compared to 2019 Lok Sabha elections.

Our post poll survey predicts that TRS will elect Mayor on its own strength, MIM will suffer a bit, BJP would  increase its seats and vote share.

Note: The margin of error is plus or minus 2 percent. The bottom-line is that the BJP has arrived in Telangana and is expected to acquire 30 plus seats in an election in which the traditional vote bank did not vote. Come 2023 or 2022 if the PM would have his way in one nation – one elections theory, the BJP is going to give a very tough fight to the TRS.