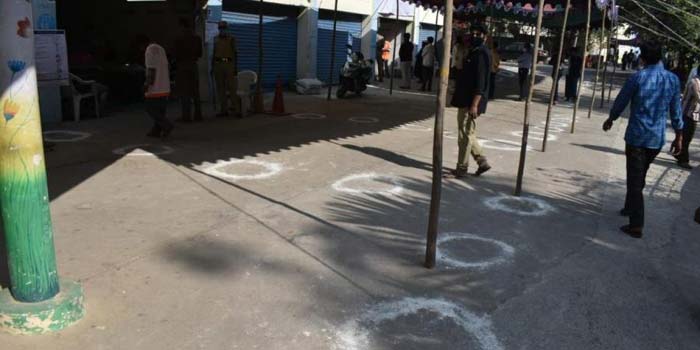 Hyderabad: The people of Greater Hyderabad Municipal Corporation (GHMC) preferred to stay away from the polling booths despite witnessing  no-holds-barred campaign by the ruling TRS and the Opposition BJP and MIM.  Polling in one division – Old Malakpet- was cancelled due to change   of party symbols, a mistake on part of  the election officials.  The re-poll will be conducted in this division on December 3. The Chief Election Commissioner of Telangana State Partha Sarathi has, therefore,  banned publication or telecast of exit polls results till 3rd evening.

Minor clashes at some places

There were clashes, mostly between the TRS and the BJP, in Jagadgirigutta, R.K. Puram, Madhapur, KPH colony, Sheikpet, MG Nagar in Banjara Hills and Uppa. In Uppal, the Congress party also was involved in the clashes. However, there were no major incidents on the day of dull polling. People who witnessed the heated exchanges in the campaign thought there would be hectic polling and the percentage of polling would surpass the last time record of 45.07. This time it may come up to just that percentage.

Low percentage of polling means it would be advantageous to  the ruling party. If people were upset with the government and angry with it, they would have turned out in big numbers to vote the ruling party out. It was obviously not the case. The TRS has a definite  advantage. The BJP might vastly improve upon its performance five years ago but it is not likely to beat the TRS this time.

The Covid disease is the main reason for the voters’ apathy besides the luxury of holidays on three days continuously. The unofficial estimate of the polling  percentage is about 45 percent. The official declaration would come later in the evening.  At 5 pm, the figure was 35 percent. The old city of Hyderabad was as cool as the high-tech city.