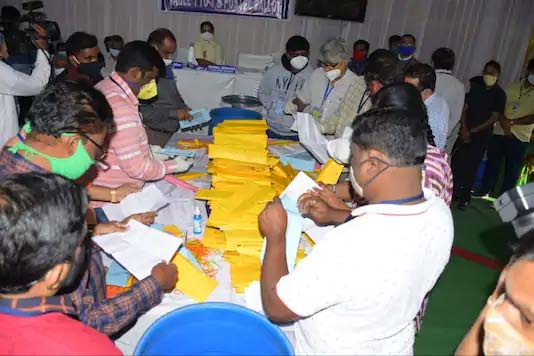 Dubbaka: Counting for Dubbaka by poll begun today morning at 8am at Indore Engineering College, Siddipet. Counting has begun in two halls with 23 rounds with 14 tables arranged for counting. Postal ballot counting has been completed and results are awaited.

After the completion of six rounds, BJP candidate Raghunandan is leading over TRS candidate S.Sujatha with 2700 votes. Counting was completed for Dubbaka rural and Dubbaka urban where BJP clearly showed initial lead over TRS. Only Dubbaka consists of 40,000 votes, out of which 20,000 were counted until now. BJP is expecting 5000 votes lead from this Mandal.

Congress is in 3rd position with only 3285 votes polled for up to now and it is clear the war is between TRS and BJP. TRS is hoping that party will get lead in other Mandals and pin keeping on counting. Chegunta will be a deciding one for both the parties, which will impact on the victory. This Mandal consists of voters who are up against Mallana sagar project, if BJP gets majority in this Mandal, there might be surprise for BJP in this election as per political analysts.

One by-poll which highlighted the importance of elections in Telangana is Dubbaka, with leaders of major parties camping in the constituency. The sight of the leaders falling on voter’s feet shows the critical importance of win for parties like BJP and the Congress who took this election as do-or-die battle.

Dubbaka constituency is located in old Medak district with neighbouring constituencies won by CM KCR (Gajwel) and his nephew T. Harish Rao (Siddipet). Out of 10 in the old Medak district 9 MLA seats and lone MP seat were won by TRS in 2018 , 2019 elections, thanks to finance Minister Harish Rao for his untiring efforts. The by-poll of Dubbaka is necessitated after sudden demise of TRS MLA Solipeta Ramalinga Reddy.

Still 17 rounds to go for counting, it may be nail-biting finish at the end. For the first time 82.6% polling was done which was highest for a by poll election.