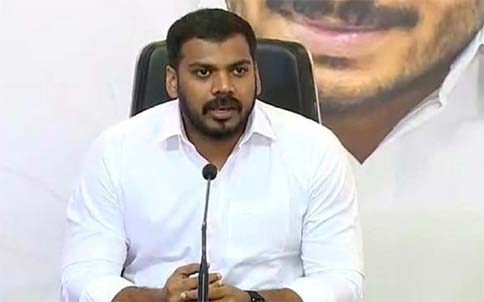 Nellore : Minister for Water Resources Anil Kumar Yadav made it clear that the State government will not compromise on Polavaram project and promised  to complete it by December 2021. He flayed opposition leaders for  neglecting the project during their term by making secret pacts for the sake of commissions from contractors.

Addressing a press conference here on Friday, the minister said that the previous government welcomed the package announced by the Union Government and brought the Polavaram project under the package without considering cost escalation involved in the project. Anil Kumar said that this situation would not have arisen but for the greed of TDP for commissions. Although the Centre promised to complete the project at its own expense,  it handed over the responsibility of construction of Polavaram to the state at the request of the then chief minister. He dared the opposition leader Chandrababu Naidu to reveal the cabinet note of 2017, which was attended by former TDP Ministers.

The Minister slammed opposition leaders for making false allegations against the State government and making it responsible in the current predicament. The TDP leaders are stating that 70 percent of the works were completed in their ruling and spent only Rs 17,000 Crore, while the entire cost of the project is Rs 55,000 crore. The minister said that the TDP leaders have left R&R works from the project profile and asked to explain how they completed 70 percent of the work with only one fourth of the budget.

Lokesh no match to Jagan

He criticised Nara Lokesh for shamelessly making allegations against Chief Minister YS Jagan Mohan Reddy and said that Lokesh was no match to Reddy and doesn’t have any moral right to speak about him. The minister did not say a thing about the criticism mounted by Vundavalli Arun Kumar against the government for compromising on Polavaram.