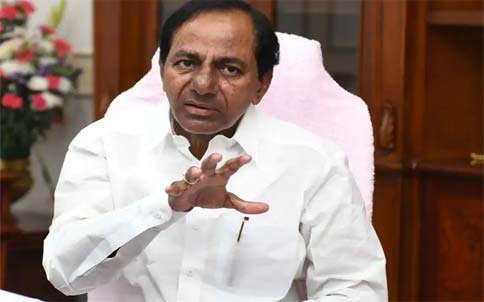 Hyderabad: with all the opposition parties busy with the by-poll campaign in Dubbaka, Chief Mnister Kalvakuntla Chandrasekhara Rao (KCR) focused on upcoming GHMC polls.  He is confident that T. Harish Rao can complete the task of the election to be held on Nov 3rd for Dubbaka. But his main concern is about GHMC polls which may be held in the month of December.

After Hyderabad and Telangana witnessed heavy rainfall, biggest in the past 100 years, there was  revolt against  ruling party MLAs and  Corporators by public for delay in rehabilitation and relief work. To counter this, KTR thronged into action to pacify them with compensation.

Now CM had a survey report on hand for upcoming elections which shows that the people are not satisfied with work of senior leaders and sitting corporators in majority divisions. After viewing detailed report of survey, KCR quickly changed his mind and ordered leaders to identify fresh, young leaders who are interested to join the ruling  party. It is clear that youth are getting distanced from TRS in City and are looking towards opposition parties. CM came to know that majority youth voters favoured BJP and Congress during Lok Sabha elections of Secunderabad and Malkjagiri constituencies which made difference in the result.

The TRS Supremo  kept an eye on active young leaders of opposition parties who can make difference in results. He wants to admit them into the TRS and fill the gap which was formed as a part of anti incumbency against his party sitting MLA’s and corporators. On the other hand, young employees are totally against his party for the incomplete works of roads, drainage and heavy traffic jams.

KTR is targeting 100 seats this time but will youth favour TRS for upcoming GHMC elections? Will KCR’s Strategy work?.