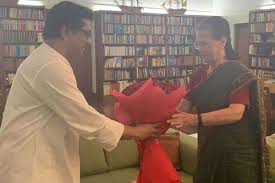 Maharashtra Navnirman Sena (MNS) chief Raj Thackeray on Monday met UPA chairperson and Congress leader Sonia Gandhi to discuss the issue of Electronic Voting Machines (EVMs) and various political developments.
Earlier on Monday, Thackeray had met Chief Election Commissioner Sunil Arora with his demand of Assembly polls, which will be held in the state, later this year, be conducted through paper ballots instead of EVMs.
On his visit to Delhi, Thackeray said that he has submitted a letter to the Election Commission, demanding it to switch back to the traditional paper ballot. He termed the meeting "mere formality".
After the meeting, he told the reporters, "There are doubts in the minds of voters that the votes they cast do not go to their chosen candidates. In such a scenario, the Election Commission should switch back to paper ballots and conduct the Maharashtra state polls through it. We strongly feel that the EVMs can be tampered with."
He also cited media reports which stated that there was a difference in the tally between the votes cast and votes counted in nearly 220 Lok Sabha constituencies.
In his letter, he said, "This gave rise to suspicion in our minds. The doubts over the credibility of the EVMs further increased when the Election Commission removed this data from its website."
Furthermore, he also sought to know how secure are the Public Sector Undertakings — Bharat Electronic Ltd and Electronic Corporation of India — which manufactures the EVMs.
The MNS did not contest the Lok Sabha polls but Thackeray had run an aggressive campaign against the Narendra Modi government. The party contested the 2009 and 2014 Assembly polls in which its tally came down drastically from 13 to one.