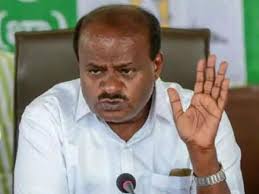 The Congress, on Monday, said that all of its serving ministers voluntarily resigned from their posts to accommodate disgruntled legislators, in the last resort effort to save the H.D. Kumaraswamy-led coalition government in Karnataka.
"Ministers voluntarily resigned to make way for others to be accommodated," Siddaramaiah, former CM said on Monday.
According to reports, Janata Dal (Secular) or JD(S) and Congress legislators have held several rounds of meetings with the senior leadership to save the year-old government. Pushing the government on its edge of colla[se, at least 13 members from the coalition and one minister have resigned in the past two days.
The JD(S) is likely to seek resignations from its ministers to accommodate disgruntled elements.
H. Nagesh, an independent candidate from Mulbagal in Kolar, on Monday resigned from the cabinet and extended support to the Bhartiya Janta Party has been looking for another chance to form government in the state. Meanwhile, the Congress is yet to work out modalities for this proposed reshuffle.
"All new ministers may come. Some from the present government may be retained," Siddaramaiah said.
At least 10 disgruntled legislators are currently holed up in Mumbai.
All India Congress Committee (AICC) general secretary (Organisation) and Karnataka in charge, K.C Venugopal said, "We have requested MLAs who have resigned to come back and have a conversation with us."
The two sides hold the Bharatiya Janata Party (BJP) responsible for the resignation drama in Karnataka.
Venugopal claimed that this was the sixth attempt by the BJP to destabilise the government and it would fail miserably even this time.