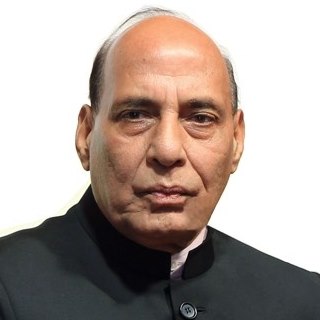 Defence Minister Rajnath Singh met Andhra Pradesh Chief Minister YS Jagan Mohan Reddy and the state officials in Visakhapatnam. Rajnath Singh was accorded a rousing reception at the INS Dega airport and naval base here during his maiden visit to the headquarters of the Eastern Naval Command (ENC).On arrival at INS Dega, he was received by Admiral Karambir Singh, Chief of the Naval Staff (CNS) and Vice Admiral Atul Kumar Jain, Flag Officer Commanding-in-Chief, ENC and was presented a Guard of Honour.

Mr Singh is expected to review the activities of the Eastern Naval Command during his stay in the city.

"During the visit, Rajnath Singh would be apprised on the operational readiness of the Command and other relevant aspects of maritime and coastal security in the Eastern Seaboard at Headquarters, ENC. The Defence Minister is also scheduled to visit ships and submarines of ENC and interact with the naval personnel and defence civilians before his departure to New Delhi," the press release said.

"The Defence Minister also held a meeting with Chief Minister of Andhra Pradesh YS Jagan Mohan Reddy and officials of State and District Administration on Saturday evening. Both jointly reviewed the progress of ongoing infrastructure projects and proposals of the Indian Navy in Andhra Pradesh and directed concerned officials to continue the proactive Civil-Military Synergies and cooperation between the Indian Navy and Government of AP to expedite the progress of the naval issues," the press release added.