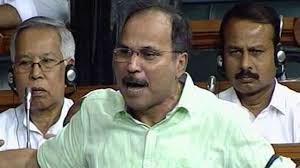 Indian National Congress named its five-time MP Adhir Ranjan Chowdhury as its leader in the Lok Sabha on Tuesday. The decision has come up as party president, Rahul Gandhi is reportedly reluctant to take up the post.

Reportedly, the decision was taken during a strategy meeting of the party's brass that was headed by Sonia Gandhi.

The meeting was also said to have been attended by Rahul Gandhi and former prime minister Manmohan Singh.

Congress was compelled to choose a Lok Sabha leader following the defeat of its senior leader Mallikarjun Kharge in the Lok Sabha elections.

On the first day of the Lok Sabha's Budget session on Monday, PM Modi claimed that despite the numbers, the opposition has a huge role to play in a democracy.

Adhir Chowdhury had, according to News18 however, hit out at BJP saying that most of its leaders did not follow what the Prime Minister was preaching