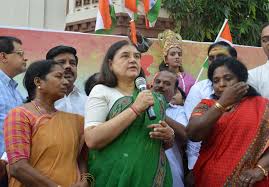 Union Minister Maneka Gandhi, who found herself in more than one controversy for her statements this election season, said that she doesn't think of the lotus - her party's (BJP) symbol- when she does her duties as an elected representative. While speaking to NDTV on the campaign trail in Uttar Pradesh's Sultanpur from where she is contesting, Ms. Gandhi claimed that her "vote for her or else..." remark was taken "totally out of context".

Last month, Ms. Gandhi was widely criticized for her comments that Muslims who did not vote for her should not expect any help from her at an election rally in Sultanpur.

In turn, the Election Commission had issued a show-cause notice on those comments and had banned her for campaigning for 48 hours.

"Wherever I've gone, I've always thought of all religions and castes as one. When we do work, we don't think of the lotus," Ms. Gandhi told NDTV. "But in the end, when it is time for voting and people say that they will not vote for me just because they don't want to vote for the lotus symbol, I feel very bad."

A few weeks later, Gandhi was sent another notice by the EC for saying that there is a plan to grade villages according to the number of votes for her and prioritize development work accordingly.

In early April, Maneka Gandhi found herself in a controversy when she described Bahujan Samaj Party chief Mayawati as a "merchant of tickets" accusing her of taking Rs. 15-20 crore from those who wanted to be chosen as her party's candidates.

However, she refused to react to her son, Varun Gandhi’s recent statement that the Uttar Pradesh alliance leaders are "Pakistanis".

Sultanpur will vote in the sixth phase of Lok Sabha elections on May 12th. The results of the seven-phase national election will be announced on May 23rd.