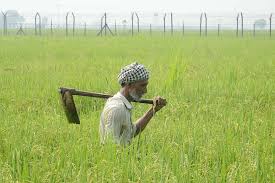 According to the Agricultural ministry on Tuesday, around 3.10 crore small farmers have so far received the first portion of ₹2,000 each under the PM-Kisan scheme and 2.10 crore peasants have even received the second installment as well. The total cost has been accounted for to ₹10,500 crore.

Ahead of the Lok Sabha polls, the Centre announced the ₹75,000-crore Pradhan Mantri Kisan Samman Nidhi (PM-Kisan) scheme under which ₹6,000 per year would be paid to 12 crore farmers in three equal installments boiling it down to 500/month. Small and marginal farmers who hold cultivable land of up to 2 hectares are eligible under the scheme.
The Election Commission of India (ECI) had allowed the Union Agriculture Ministry to transfer the 1st and 2nd part of the payment to the farmers registered before it introduced the Model Code of Conduct (MCC) on March 10th.
The NDA government's budget allocated a sum of ₹20,000 crore for the PM-KISAN scheme in the first installment by March-end, for the ongoing fiscal.
The scheme was officially launched at the national level by PM Narendra Modi on February 24th at Gorakhpur in Uttar Pradesh by transferring the first installment to 1.01 crore farmers, amounting to ₹2,021 crore.
In UP, the first installment has been transferred to around 1 crore farmers so far and to 30 lakh farmers in Andhra Pradesh.
According to an official, Punjab and Haryana are amongst the top beneficiary states as they have completed the registration of its farmers under the scheme.