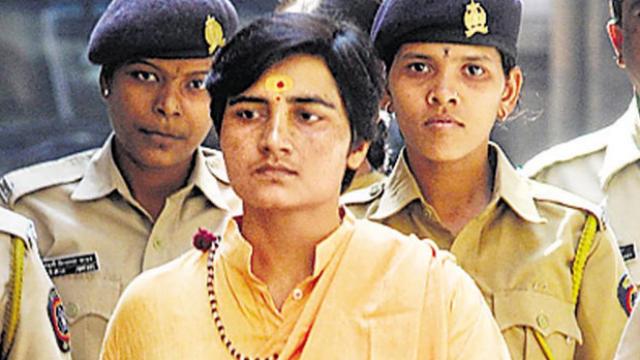 BJP's Bhopal candidate Sadhvi Pragya Thakur responded to the EC's show cause notice on Sunday by defending her position that she didn't make any defamatory comments for any martyr and resorted to her Right to express in public.

The Bhopal BJP candidate has created a huge controversy on Thursday after saying that ATS Mumbai chief Hemant Karkare had died as she had cursed him. The EC sent a notice to the Pragya for her uncalled for remark.
She had accused Karkare of torturing her while she was in custody for her involvement in 2008 Malegaon blasts. However, she had later apologized for her statement. "If my remarks made enemies happy, then I take my words back, and I apologize too. Our remarks shouldn't make enemies happy. The pain I went through, it can't be reversed, but terrorists killed Hemant Karkare, he certainly is a martyr," she said while talking to news agency ANI.
While replying to the first notice, Pragya Singh Thakur said "I didn't make any defamatory comments for any martyr. I had mentioned about the torture inflicted on me on orders of the then Congress government. It's my right to put before the public what had happened to me'.
On Saturday Thakur had given rise to another controversy when she said that she had ‘wiped off the blot from the country’ by demolishing the Babri mosque. and was later served a notice by the Election Commission.