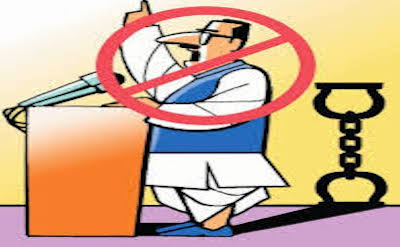 It isn’t uncommon that Election candidates have a criminal history however, what is uncommon is people knowing about it on a large scale before going to vote.

During a meeting with representatives of political parties at the District collectors office, District Magistrate of Mumbai, Shivaji Jondhale recently announced that Election candidates with offenses registered against them are mandated to publish the criminal records at least thrice in newspapers and electronic media after filing their nomination papers.

Jondhale also added that the political parties and their candidates should follow the existing laws and instructions laid down by the Election Commission while filing nominations for the approaching Lok Sabha polls.

On the same lines, the candidates who are in the fray are required to open their personal bank account before the filing of nomination papers so as to keep the account of poll expenses.

Jondhale then urged the printers and publishers to follow the model code of conduct norms pertaining to campaign material and other printing-related issues failing which will lead to six months of jail.

Violation of the rules pertaining got printing under section 127 (A) of the Representation of People Act, 1951 can lead to imprisonment up to six months of a fine of Rs. 2,000 or both.

As per the rules, the name and address of printers and publishers must be mentioned on the printed material. Mumbai city will be voting for the Lok Sabah elections on 29th April