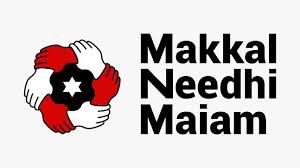 Makkal Needhi Maiam (MNM) party on Monday informed that they will share the list of candidates for the upcoming Lok Sabha polls on March 20.

"The list of candidates who will contest in 2019 Parliamentary and By-Elections on behalf of Makkal Needhi Maiam will be revealed on 20/03/2019," stated Dr R. Mahendran, Vice President of MNM in a press release.

"Our aim is to not go with any tainted group. We are preparing to contest 40 seats in Tamil Nadu and Puducherry. I cannot say at this moment from where I will contest," said Haasan while talking to media personnel.

Makkal Needhi Maiam is a political party in the Indian state of Tamil Nadu founded by Kamal Haasan.  He launched it at a public meeting in Madurai on 21 February 2018. He also unveiled the party flag. The flag is symbolised by six interlocked hands, meant to represent co-operation between the Southern states of India (5 States and 1 UT). Candidates will contest the election under the 'battery torch' election symbol.