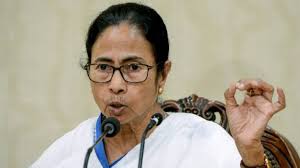 West Bengal CM Mamata Banerjee accused the BJP government of stealing the country's reserves and wondered how would it ensure the security of the nation when it was unable to protect files related to the Rafale deal today.

Claiming that there had been a 260 percent rise in terror incidents in Kashmir during the present regime, Ms. Banerjee said the BJP-led NDA government failed to restore peace in the valley as it had crossed the expiry date.

She said that after the elections, the new government at the Centre will bring peace and stability in Kashmir."

She was reportedly addressing a rally on the occasion of International Women's Day in Kolkata during which she kicked off her party's campaign for the upcoming Lok Sabha election.

"You (BJP) have stolen all the reserves and money of this country and is using it to fund your party. How will the government, which can't protect the Rafale files, protect the security of the country," she asked.

She took pride in her Trinamool Congress for having 35 percent women legislators in the 16th Lok Sabha even as the Women's Reservation Bill was yet to be passed in Parliament.

"While the Women's Reservation Bill has not yet been passed in #Parliament, I am proud that our party @AITCofficial has 35% of women MPs in the 16th Lok Sabha. We have also reserved 50% seats in local bodies for women candidates #IWD2019