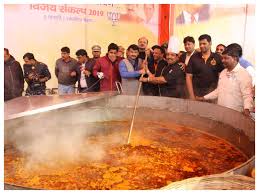 In the quest to establish a stronger connection with the Dalit for the Lok Sabha elections, the BJP is holding 'Samrasta Bhoj' (social harmony feast) in the 12 reserved assembly constituencies spread across six parliamentary seats in Delhi.

The SC Morcha of the Delhi unit of BJP had successfully organized the 'Bhim Mahasangam' rally at Ramlila ground in January.

The reserved assembly constituencies include Trilokpuri, Kondli, Seemapuri, Gokalpur, Ambedkar Nagar and Deoli, among others. These will be covered under the programme seeking support for the BJP in the Lok Sabha polls.

Morcha president Mohanlal Gihara said, "We are holding these 'Samrasta Bhoj' programmes to reach out to the Dalit voters, (to tell them) how their interests have been served under the Modi government through different welfare schemes,".

"We have lined up Union ministers Thawar Chand Gehlot, Krishna Raj, Harsh Vardhan, and Vijay Goel to participate in these events," he added.

He further stated that a world record was set by cooking 5,000 kg of 'samarasta khichdi' using rice and pulses collected from around three lakh Dalit households in Delhi. The leftover rice and pulses are now used for cooking 'khichdi' at 'Samarasta Bhoj',

"Cooking 'samrasta khichdi' and then serving it among the members of the community fosters unity and provides them with an opportunity to know how the Modi government is working for them," Gihara said.

The BJP had won all seven Lok Sabha seats in the 2014 general elections. With the AAP not forming an alliance with Congress, Delhi will witness a triangular contest in the polls scheduled for April-May.