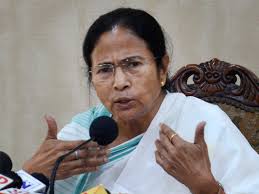 West Bengal Chief Minister Mamata Banerjee was the victim of BJP’s twin attack in Parliament and outside. Minister of Home Affairs, Rajanth Singh said that it was "unprecedented the way the CBI officers were stopped" in Kolkata on Sunday, his colleague and education minister, Prakash Javadekar, accused Ms Banerjee of defending those who had once gone to jail for the Saradha scam.

Singh added that there may be constitutional breakdown in West Bengal and the Centre has the power to take action to main normalcy in any party of the country.

He called the incident in Kolkata a threat to federal political system of country.

Singh further added that he had asked for a report from the West Bengal Governor, who summoned the state Chief Secretary and the police chief and asked them to take an immediate action to resolve the situation.

The minister said that the central forces had to be deployed at the state CBI office and residences the officers of the probe agency in Kolkata, as the city's police officials surrounded their offices. The CBI team yesterday alleged that they were "obstructed and manhandled" by the police.

The home ministry, will look into the role of some senior police officers for allegedly obstructing the CBI team probing the Saradha scam in Kolkata.

The CBI informed the Supreme Court today that it has material as evidence against the Kolkata police chief and has accused him of "destroying evidence" in the chit fund scam.